In this conversation with Coach with Clarity member Courtney Watson we talk about common questions that come up in the transition from therapy to coaching. We cover how to differentiate between therapy clients and coaching clients, how to know if a certain approach or technique is appropriate for coaching, how to find ideal clients for that program, and more. 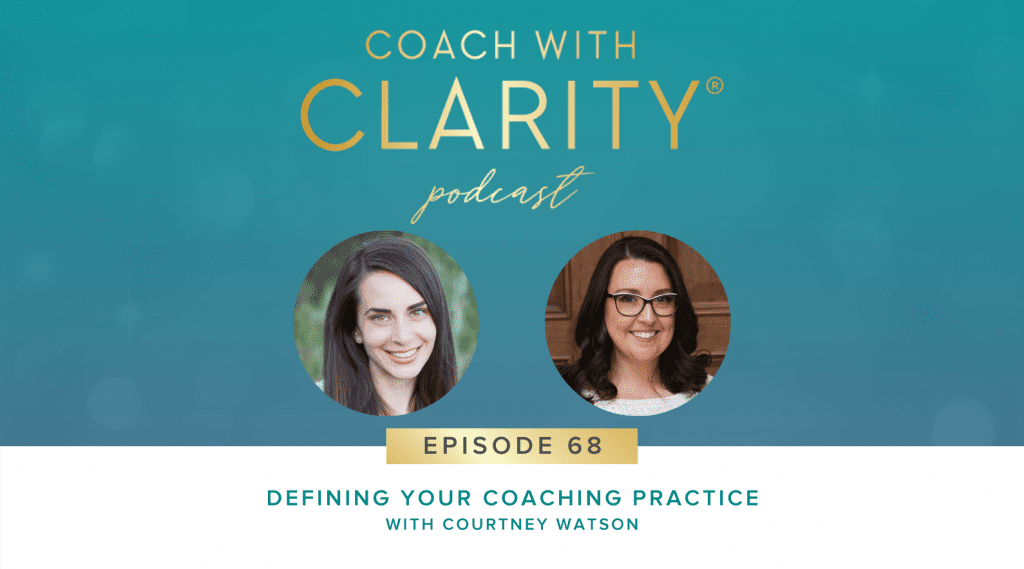 If you've been wondering about making the transition from therapy into coaching or starting a new group coaching program, this episode is for you. For today's coaching call, I'm so excited to introduce you to Courtney Watson, a counselor based on the West Coast with quite a bit of experience providing trauma therapy.

If you’ve been wondering about making the transition from therapy into coaching or starting a new group coaching program, this episode is for you.

For today’s coaching call, I’m so excited to introduce you to Courtney Watson, a counselor based on the West Coast with quite a bit of experience providing trauma therapy.

Courtney is interested in creating a group coaching program and on this call we cover quite a lot of ground from whether you need to start with one-on-one coaching, how to differentiate between your therapy and coaching clients, what goes into starting a group program, what you can do to vet potential members for your program, and more.

I’m so grateful to Courtney for sharing what she’s been pondering and giving us a look behind the curtain as she develops her first group coaching program. So much of what Courtney shared reflects what I’ve heard from my clients, members, and students and I think you'll get a lot out of today's coaching call.

Well, hello, my friend. Welcome to the Coach with Clarity podcast. My name is Lee Chaix McDonough, and I have the honor of hosting this show every week. And I am so thrilled that you are joining me today for a coaching call. I absolutely love coaching calls because it's an opportunity for me to connect one-on-one, and provide some targeted coaching to an up-and-coming coach, and that is exactly what we have in store for you today. I am so excited to introduce you to Courtney Watson. Courtney is a counselor based on the West Coast, who has quite a bit of experience providing trauma therapy. And she's interested in transitioning into coaching, specifically group coaching, and had some questions around how to do so, especially without doing one-on-one coaching first, and how to speak to a population that is similar to the people she serves as a therapist. So we talk a lot about how to differentiate between the two audiences, how to start a group program, and how to bring people into that initial cohort. We actually covered quite a bit in our 30 minute conversation, so I think you're going to get a lot out of today's coaching call. So I'm really glad you're here. Let's go ahead and get started. Here's my coaching call with Courtney Watson.

I am so grateful to Courtney for coming on the show, and giving us a look behind the curtain as she develops her very first group coaching program. So much of what Courtney shared in our coaching call today is something that I've heard from my clients, my members, and my students. And so I am just so appreciative of her willingness to ask the tough questions, to share some of what she's been pondering, because I know that she is not alone in wondering how to differentiate between her therapy clients and her coaching clients. How to know if a certain approach or technique is appropriate for coaching. And then of course, how to find ideal clients for that program. So Courtney, thank you for sharing your time, your talent, and your business with us. We've got links in the show notes to Courtney's website, so definitely reach out if you'd like to learn more. As I mentioned at the top of the show, Courtney is a member of the Coach with Clarity Membership, and today's call gives you a little taste of what you can expect within the membership. We have weekly calls that include hot seat coaching, q&a sessions, guest expert trainings, co-working sessions, there's always going to be a way for you to engage with fellow members and with me. There is also a toolkit filled with resources to help you start, build, and grow your coaching practice, including an attorney prepared coaching contract. You definitely want to have a contract in place when you're working with clients, and we got you covered with that. So if you are ready to take your coaching practice to the next level, and you'd like some support and camaraderie in doing so, I strongly encourage you to check out the Coach with Clarity Membership. Just head to CoachwithClarity.com/membership to learn more and join. Alright, my friend. That's it for me this week. But guess what? I'm gonna be back next week with a brand new episode just for you. So if you have not followed the podcast yet, be sure to do so. You can go to Apple podcasts, Google podcasts, Stitcher, Spotify, IHeartRadio, you name the platform, you're probably going to find the show there. So go ahead and follow it so that way every time we release a new episode, it's going to show up in your feed automatically. And next week's episode is going to be a fun one, because I am going to give you a behind the scenes tour of what it was like to create a certification program. I'm going to share everything I learned, the wins, the life lessons, and I'm going to share a special announcement with you about what you can expect this summer. So you are not going to want to miss next week's episode, so be sure to follow the podcast today. So until next week, this is Lee Chaix McDonough, reminding you to get out there and show the world what it means to be a Coach with Clarity. 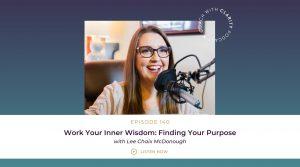 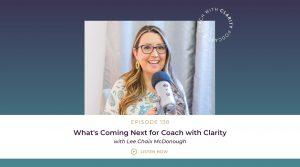 Episode 138: What’s Coming Next for Coach with Clarity 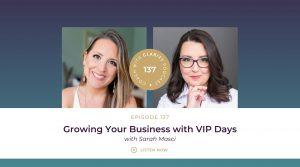 Episode 137: Growing Your Business with VIP Days with Sarah Masci