On this coaching call, Charlotte Nicholson and I talk about increasing your visibility by taking action from a place of clarity. 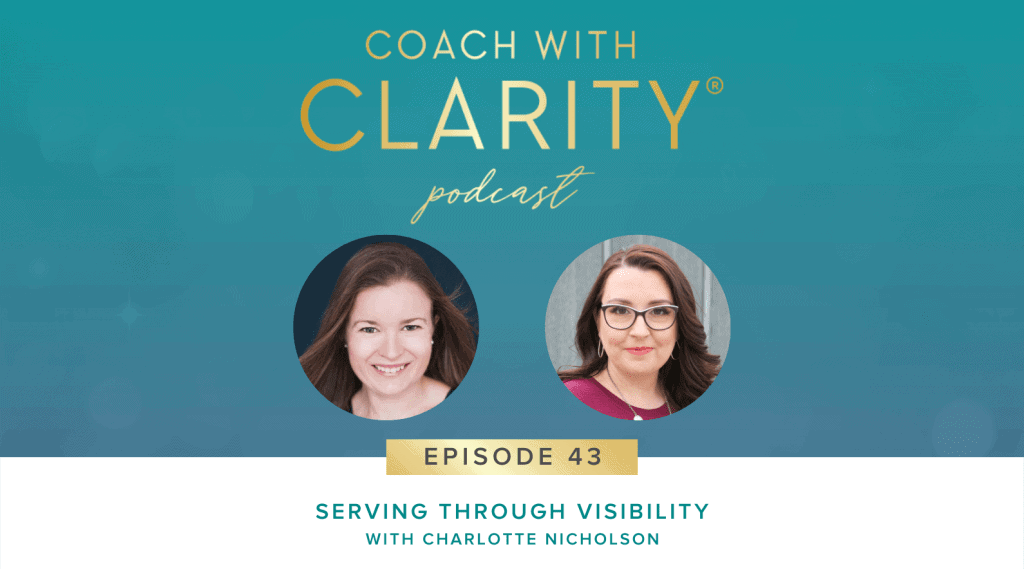 In today's episode, we're talking about visibility, creating authentic connections, taking action from a place of clarity. On this coaching call, I had the pleasure of speaking with Charlotte Nicholson who is an expat coach who currently resides in the Netherlands.

In today's episode, we're talking about visibility, creating authentic connections, and taking action from a place of clarity. On this coaching call, I had the pleasure of speaking with Charlotte Nicholson who is an expat coach who currently resides in the Netherlands.

Charlotte is on a mission to support and coach others through remarkable expat experiences, from the moment the opportunity of a lifetime is put in front of them. She focuses her coaching work on supporting the spouses who are moving frequently, and who may struggle with establishing their identity, whether personal or professional, in their new location.

What I especially loved about this chat is that Charlotte already knew much of what she wanted to do and I was able to help her get super clear on the next steps that she's going to take in her business. I suspect that as you listen, it's going to inspire you to take the next steps you want to take in your business as well.

I hope you'll come to find me over on Instagram (@CoachWithClarity) and let me know your key takeaways from this call and how it's going to inform the decisions that you make and the actions that you take in your business.

Discover your Coaching Superpower! Go to https://coachingquiz.com to learn more about your strengths – and what to look out for – as a coach.

Well, hi there, my friend. Welcome back to another episode of the Coach with Clarity podcast. My name is Lee Chaix McDonough. I am your host on this journey through the art and business of coaching, and today I am thrilled to share another coaching call with you. I had the pleasure of speaking with Charlotte Nicholson who is an ex-pat coach. She currently resides in the Netherlands, and she focuses her coaching work on supporting the spouses who are moving frequently, and who may struggle with establishing their identity, whether personal or professional, in their new location. So she does some terrific work, and in today's call, we really focused on how to refine her strategy of connecting with her ideal clients and inviting them to get to know her and her work more deeply through a discovery call or connection call. It's a fantastic coaching call that I am thrilled to share with you. And what I think you'll find is that Charlotte already knew innately much of what she wanted to do. So our call today was really just kind of refining her process and helping her get super clear on the next steps that she's going to take in her business. And I suspect that as you listen, it's going to inspire you as well so that you feel more clear about the next steps you want to take in your business as well. So let's go ahead and take a listen to my coaching call with Charlotte Nicholson.

I hope you enjoyed that coaching call as much as I did, and I have to say that my key takeaway here was that this call really supported the fact that Charlotte knows what her business needs from her, her instincts are spot on. The decisions that she's making are fully in alignment with what matters to her and will support her business, and now it's a matter of stepping into that belief and taking action accordingly. And I have no doubt that she will be doing that. And I know that you will be doing that too. I can't wait to hear how this call inspires you to take further action in your business, and I hope you'll let me know! You can come find me over on Instagram @CoachwithClarity. I'd love to know what key takeaways you had from this coaching call and how it's going to inform the decisions that you make and the actions that you take in your business. Today's call was also a really lovely example of the kind of coaching work that I do within the Coach with Clarity Membership. So within the membership, we have a live call pretty much every week. And every month one of those calls is a hot seat coaching call. That is an opportunity for Coach with Clarity members to get one on one coaching and consultation with me. We can really dive deep into anything that's going on in their business, in their relationships, in their life, and they can receive some targeted coaching within a supportive community of other intuitive heart centered coaches. I love conducting these hot seat coaching calls, and what I find is that yes, they are extraordinarily powerful for the person on the hot seat, but even if you're not on the hot seat, even if you're a member who's tuning into the call and just listening in, there is so much to be gained there. Both in terms of observing how to conduct a coaching call, and also how the key insights and takeaways for the person on the hot seat can be applicable in your own business and in your life as well. So there's so much value in the hot seat coaching calls, as well as the Q & A calls, the guest expert trainings, the co-working sessions, the toolkit filled with resources to help you build and grow your coaching practice. It is just extraordinary what is available to you within the Coach with Clarity Membership. So if you have not checked it out yet, I highly encourage you to do so just had to CoachwithClarity.com/membership and you'll find all of the information you'll need to make a decision about whether or not the membership is right for you. If you are an avid listener of this podcast, I suspect you would love this membership and I would love to welcome you as a Coach with Clarity member. All right my friends, that's it for this episode of the Coach with Clarity podcast. I will be back in your feed next week, as always, with another terrific episode. And until then, my name is Lee Chaix McDonough, reminding you to get out there and show the world what it means to be a Coach with Clarity.
Click to read the entire transcript 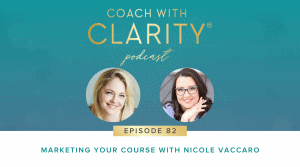 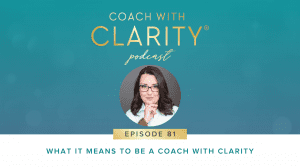 Episode 81: What It Means to Be a Coach with Clarity 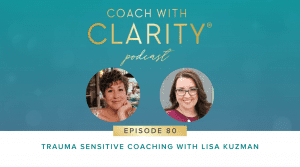